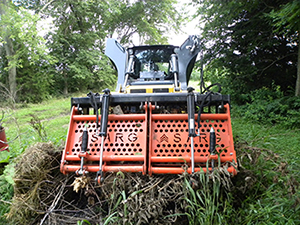 Farmer Tom Justison recently bought a Sweep Action Rock Grapple (SARG) from Worksaver, Inc. to use on his family farm in Montgomery County, Illinois. The Justison farm is several thousand acres with a production ratio of 60% corn, 30% beans and 10% wheat. They also raise a few head of cattle and several goats, primarily to support 4-H and FFA (Future Farmers of America) activities. Truly a family farm, the land is worked by Justison; his wife, Pam and their son, Tommy, along with Justison’s brother, David, his wife Lana and their son and two daughters.

Justison utilizes equipment on his farm from John Deere®, Case IH, Kubota and New Holland. The SARG is the second Worksaver grapple he has purchased. It joins a model SSGR-262 grapple for his skid steers. Until this past year Justison taught as part of an agricultural program at a small school in Illinois and he saw Worksaver’s new Sweep Action Rock Grapple while on a field trip with his agricultural students at the company’s manufacturing facility in Litchfield, IL. 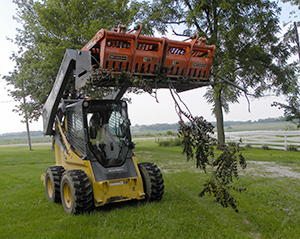 After seeing the SARG demonstration, Justison found further information about it on the company’s website which helped with his decision to purchase a 72” Sweep Action Rock Grapple for his farm. “I have a grapple from Worksaver,” said Justison, “but the SARG has a feature with the tines where you can sort out the soil or dirt from the rock and roots. And it has a flexible clamp system that allows you to pick up items of different size.”

There is not another grapple built like it on the market today. Designed for skid steer loaders, the SARG handles rocks, brush, logs, stumps, debris, scraps and other materials; it is three tools in one. The grapples operate in a sweeping action to pull rocks or debris into the bucket much like a thumb, holding the rocks or debris in the bucket while the dirt and soil is left behind. The grapples work independently of each other, allowing the SARG to securely clamp loads that are uneven.

Since purchasing, Justison has used his SARG for several jobs including picking up limbs, brush and trash. “It’s on our skid steer loader almost 60% of the time because it’s just so versatile,” he said. “And it has good visibility. Visibility is very important for safety and safety is a big thing.” 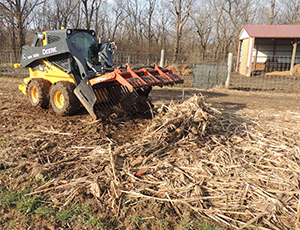 Justison also found it is a time saver when picking up roots while they were cleaning out fence rows. Instead of picking up the roots by hand, the SARG can be moved along the ground to gather up the roots, while leaving the dirt behind. “This grapple works very, very well and it’s quite a labor-saver,” Justison said. “You can save your back and at the same time have a safe operation off the skid loader. It’s a well-designed piece of equipment.”

The Sweep Action Rock Grapple has consistently delivered high performance for Tom Justison and his family’s farm, providing an easy and efficient way to handle large and small debris with a single attachment.  “It’s very user friendly.  We’ve had no mechanical difficulties with it or any failures.  It’s worked out very well,” Justison said.

Worksaver, Inc. is a manufacturer of agricultural, industrial, commercial and construction equipment for a variety of applications for property owners, farmers, ranchers, contractors and many others.  A variety of equipment is able to fit skid steers and front loaders and tractors.